Willy came to us in September 2017, making him the newest arrival to our rescue.  We don’t have all of Willy’s paperwork so a lot of his history, breeding and exact age are a mystery.  Our vet estimates that Willy is close to 22 years old.  He looks very much like an Arabian, although he could be mixed with something, maybe Quarter Horse.  Willy came to us in poor condition, as you can see from some of his earliest photos.  His right knee is a terrible mess, we were told that it’s an injury he suffered as long as 3 years ago and that he was kicked by another horse.  Upon Willy’s arrival we immediately had the knee examined by our vet, and we began draining off infection, soaking, massaging and giving him antibiotics and anti-inflammatory drugs daily.  Willy has been putting on weight steadily and while his knee is not decreasing in size he is moving around a little better.  He now has a girlfriend named Snowflake, who boards with us.  They are both white horses and seem to get along great.  Snowflake is much younger than Willy, so she keeps him on his toes chasing her around the field.  This type of exercise has been good for Willy so that his knee doesn’t get too stiff.  Willy has participated in our Mental Health program so far.  The photos below show Willy getting therapy from one of our clients, who absolutely fell in love with him.  Willy is a very sweet guy.  He puts up with everything we do to him, leg rubs, massage, hose, whatever it is, he stands quietly.  He loves attention, especially if you are helping him.  We hope that Willy will be able to find someone or a family that could provide him a safe forever home.  He could be a wonderful companion to another lonely horse or person. 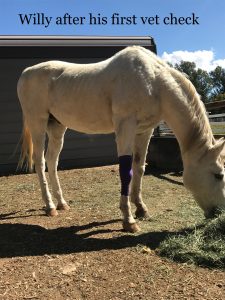 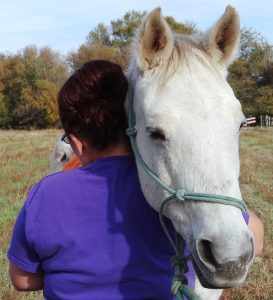 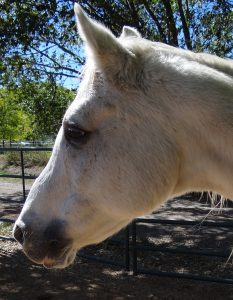 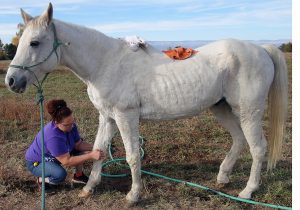 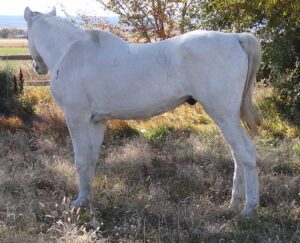 View all posts by: Kathy Hamm